The freshest thing on many lips these days is organic food.

Yet, supply isn’t keeping up with demand even as prices for organic foods range from reasonable to outrageous and there isn’t a global standardized labeling system to inform retail shoppers that the produce is ‘certified organic’.

In the United States and Canada, big box grocery stores like Whole Foods, Sobey’s and others have rooftop gardens where they grow their own organic salad greens and other small vegetables. Everything from shallots to every variety of mushroom, cucumbers, tomatoes and more, are grown on the rooftops of those stores, or on rented space atop nearby buildings. 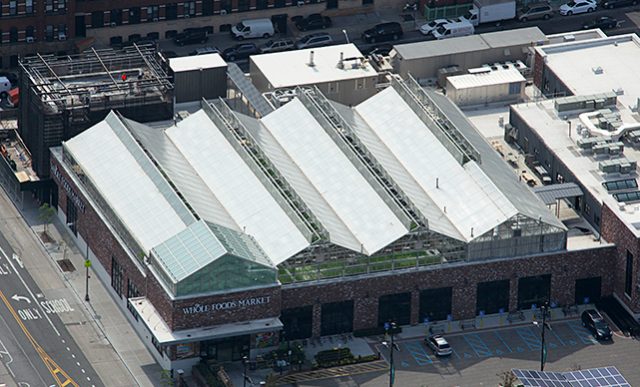 New York City and Chicago have some amazing rooftop gardens which offer public tours where you can see the food as it is being grown and speak to the people who grow your salad greens. Very cool stuff.

In Chicago, several indoor farming operations combine vertical farming with aquaponics. Small fish (tilapia) live in large holding tanks and their waste stream is the perfect organic fertilizer for plants. Eventually, the plants strip the nutrients out of the water, leaving only purified water to return to the fish tanks.

The advantage of aquaponics is that no synthetic fertilizers are required to grow healthy organic food crops and millions of gallons of water are saved every year.

Panasonic grows 81 tons of organic produce every year in a nondescript 11,000 square foot warehouse in Singapore that meets .015% of all leafy green vegetable demand in the island nation and it hopes to reach a full 5% of the market within a few years.

The company is relentless in its pursuit to add efficiency to its indoor farming operation via their advanced electronic lighting and environmental control systems.

Taking things a bit deeper, Growing Underground grows its leafy greens in abandoned WWII-era tunnels beneath the City of London.

“Growing Underground is using a 550-square-metre area fitted with hydroponics that will produce about 20,000 kg of greens every year. As the business grows, so will the farm – they have 20,000 square metres to expand into. And their produce will be exclusively for consumers within the M25.”

The above examples represent a fraction of the indoor farming operations worldwide and there is considerable room for growth in this market segment. Billions of pounds of produce are consumed every year globally and few countries have stepped up to ensure recognizable and standardized labeling to indicate these foods are 100% organic and are healthy for consumers.

It’s not only the benefits of organic food that we’re talking about here; Food that is grown locally doesn’t need to be trucked or flown hundreds of miles to get it to your grocer’s shelves. And locally grown food doesn’t need to be picked days prior to delivery and then warehoused for several more days prior to arriving at the market. It means you’re getting healthier, less bruised, and fresher produce. It also represents a drastic lowering of CO2 emissions per billion pounds of produce.

It seems natural for the UK government to quickly agree on a standardized labeling system for organic food, much of which is grown indoors — which makes it easier to guarantee the produce is 100% organic and free from GMO cross-contamination or from chemical contamination such as pesticides, etc.

Once a standardized labeling regime is in place (and please, make the label graphics easy-to-read and easy-to-understand!) it will put UK organic farmers on the fast-track to grow their market within the UK, but also throughout Europe. And that’s just what this small but burgeoning segment needs.

Instead of getting their produce shipped in from Spain or the Netherlands, UK shoppers and restaurants will be able to buy UK certified organic vegetables and fruits that are grown within a hundred footsteps of the grocery store. And the jobs that are part and parcel of growing that organic food will be UK jobs, the energy required to power indoor farms will come from UK power companies, and the income taxes paid by British workers will be paid to the UK government, instead of workers in foreign countries paying their income taxes to their government.

It’s a ‘Win-Win-Win’ for British consumers and indoor farmers if the UK government can facilitate the exponential growth curve in locally grown organic foods. And if it doesn’t, countries like Germany and Denmark surely will.

By getting the standards and labeling handled early, organic food producers can then turn their attention to expanding their operations within the UK and begin making strong client relationships with grocery store chains from Iceland to Sicily.

Let’s hope that when the House of Commons resumes sitting this autumn that Theresa May will put a strong focus on growing a newish segment of the economy that still has plenty of growth potential.