Whether you believe in global warming and sea level rise or not, most people would agree that breathing clean air is good for the body and that clean air is better for you than breathing toxic exhaust fumes and that drinking clean water is healthier for human beings. If you don’t believe that statement, you’ve got bigger problems than polluted air in UK cities.

A British citizen emits more CO2 in two weeks than some people in Africa do in a year, research shows

“The UK ranked 36th in the world for its CO2 emissions from consumption spread across its population, totalling at 8.34 tonnes per person in 2017 – the last year when such data for the UK was available. The global average for that year was 4.7 tonnes of CO2 per person.” — The Independent

As always, there is a hard way to go about accomplishing something and an easier, more efficient way of getting things done and dusted. Which brings me to the point of this particular blog post, and that is there is no reason that UK cities need to ‘go it alone’ in their quest to lower CO2 emissions — rather, by aligning with the C40 Cities initiative which provides expertise and assistance to member cities, UK cities can streamline their progress and get even better results by taking the C40 cities route to clean air and water.

Cities around the world are building a brighter future

“Human civilisation is facing an environmental crisis on a global scale. The world has failed to stop carbon emissions rising in a way that is consistent with a sustainable future for humanity and now we face a climate emergency. But the world’s leading cities are taking action to respond to the climate crisis and create the future we want.” — C40 Cities

There is help in numbers. There is also an unparalleled degree of technical assistance offered by the C40 Cities organization, and member cities share the results of their various CO2 reduction programmes with other member cities. And, being part of a larger group dedicated to CO2 reductions and better health for citizens means that UK cities won’t be ‘going it alone’.

Although there isn’t a direct link from highly polluted city air to cancer, it is widely acknowledged that respiratory ailments of all kinds are common in cities known for poor air quality and respiratory cancers represent some of those ailments.

Half of UK population ‘will get cancer in lifetime’

The number of people in the UK who will get cancer during their lifetime will increase to nearly half the population by 2020, a report has forecast. Macmillan Cancer Support said the projected figure of 47%, up from the current 44%, would put huge pressure on the NHS. But the charity said that more people were surviving cancer compared to 20 years ago. — BBC

Even though cancer survival rates have improved in recent years, it becomes ever more costly as the (expensive) technology comes online to improve the survivability odds of cancer. Prevention therefore, becomes much more important as the incidences of cancer increases and treatment becomes more expensive.

“In the 1970s, only 1 in 4 cancer patients would survive their disease for ten years or more. By 2010, this had risen to 2 in 4, and survival continues to improve today. This is due to groundbreaking research, innovative new treatments, and the tireless efforts of staff right across the NHS. However, there is still much to be done. This report summarises the current state of cancer in the UK, recognising where progress has been made, and highlighting the challenges that we continue to face. Cancer Research UK’s ambitious vision to see 3 in 4 people with cancer survive for ten years or more by 2034 serves as a driving force […] across the UK to achieve this.” — cruk.org

By working to improve air quality in UK cities, respiratory disease rates will fall — including cancers of the respiratory kind — which will help to lower NHS spending. See how it all weaves together? Investing in clean air in cities means lower healthcare spending.

And that’s a point often forgotten by some of the good-hearted clean air purists pushing for lower CO2 emissions. Clean air in cities will save us money! Even hard-nosed business tycoons can understand that kind of logic.

What Can You Do?

What can you do to help improve the air in UK cities and lower your chances for air pollution caused illness?

Living a healthier life, emitting less CO2, and living in cleaner cities will deliver the kind and scale of transformation Britons and UK cities need to survive and thrive in the 21st-century.

One of the great things about Brexit is that the UK will be free to change anything within the remit of the UK government — but without the drag induced by the overly-bureaucratic EU governmental architecture slowing things down to such an extent that by the time anything gets approved it’s no longer relevant.

And judging by actual need, doing a full reset on Britain’s passenger rail network must rank as one of the top items requiring attention by HM government in the first quarter of 2020.

It’s not only the inconvenience of slow, outdated trains that fail to depart on schedule or show up at all, or the insecurity of Britons left standing on lonely platforms waiting in the darkness for a late train, it’s the lost productivity of late or no-show workers who take the train to work that acts as a drag on UK GDP. Any of those concerns alone represent a serious issue with the British rail system, but in totality suggest that Britain’s rail system is in crisis. Which means that minor adjustments won’t suffice.

And the only important metric in any passenger rail system is customer satisfaction — otherwise, no one will bother riding trains any more.

People will only ride trains if they meet expectations IMHO, and at present, less than 50% of Britain’s train routes meet the following simple but important criteria; Cost, appropriate scheduling and destinations, comfort, and such modern-day necessities as high speed WiFi, snackbar, clean washrooms, and a high degree of personal security while aboard the train and in train stations, and on platforms and other common areas, rank highly with riders.

It’s simply a case of turning the rail system into something that meshes with the needs of riders instead of one designed to meet the profits of rail operators.

In that way, ridership will increase and rail operators will be funded by a combination of riders and government subsidy. No financial losses for rail operators! Lower spending by the government on roads and automobile-related CO2 reduction programmes! All good.

And this plan results in a virtuous cycle. As everyone leaves their cars at home, it will mean less automobile congestion in UK cities, lower CO2 levels in cities, better productivity for employers whose employees take the train to work, less curtailment of wind turbines, job creation to produce reverse-osmosis hydrogen facilities relatively near each rail terminus, job creation to manufacture hydrogen locomotives under license from the German patent-holder, zero rail disruptions due to electrical grid power failures, no more unsightly and tangled mess of wires above UK rail routes and job creation for the (as suggested in this blog post) a UK ‘Army Corps of Engineers’ so that young people can try military life at low risk and still receive a tuition-free college degree after 4-years of service.

One last point: No one would have created the UK rail system as it exists today — it evolved into what it is over many decades. Imagine that there were no railways in the UK until this very day and that tomorrow a brilliant team would assemble to begin planning the new rail system. In no way would that ‘designed from scratch’ rail system look anything like the system that exists today. At all! Not even close.

And let that be our guide! For we now have the opportunity to begin anew following Brexit, to recreate Britain’s rail network so that it works for the people, for UK cities, for UK businesses, for the UK military, and for the government. That’s a rail network everyone can buy into. Toot-toot! 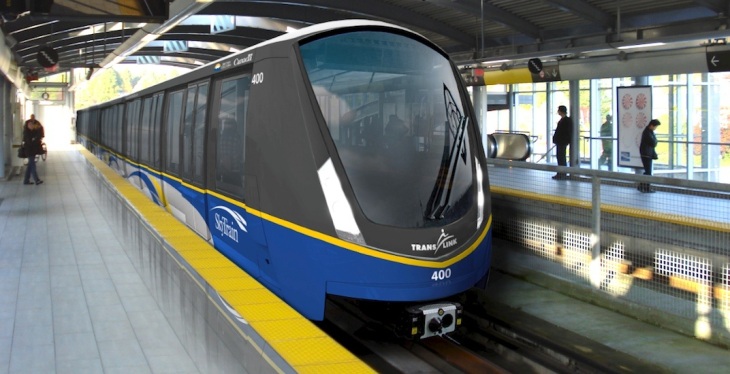 “A DayPass provides unlimited transit use on all buses, SkyTrain and SeaBus for one day from the start of the first transit service to the end of the service day. You can use it for travel through all zones, and save money over buying single fares when you take multiple trips in the same day.” — Vancouver TRANSLINK

In Britain, those Bombardier ALRT cars would require a streamlined hydrogen powered locomotive to pull them along at up to 150 miles per hour in the wide-open spaces between UK cities — instead of being powered by the Bombardier linear induction motors energized by an electrical current bar/pickup on the trackbed.