The UK is Again a Independent Nation, So Stay Out of Our Internal Politics!

It didn’t take even one full day(!) following the official Brexit date before EU politicians and former EC politicians began sticking their feet in their mouths by commenting on the internal politics of an independent nation called the United Kingdom — and this is in regards to the Scottish politician Nicola Sturgeon (SNP) who wants to separate Scotland from the UK (which, such referenda have never succeeded in the over 200-years that Scotland has been a member of the United Kingdom) and such referenda will never succeed it seems — if the people of Scotland continue to get their way on the matter.

Because every time there’s been a democratically held Scottish referendum it’s failed miserably thanks to Scot voters — and that, after much gamesmanship by those pushing their separatist garbage.

Yet, these are the same people who demand the utmost respect for the European Union project throughout the global body politic and among the world’s media.

Their gall is quite astonishing!

Imagine what the EU response would be if America, China, India or Japan began opining on some of the internal affairs of the European Union, let alone if a number of senior politicians in those countries were engaged in trying to break-up the European Union!

We have the situation in Catalonia where the leaders of that longstanding autonomous region who represent over half of the population there, were jailed or forced to flee to Germany after the Spanish government used police and security forces to brutally put down the peaceful and popular movement in Catalonia to become a fully autonomous state within Europe — a movement which was massively approved by Catalonian voters in a democratically held referendum overseen by official election monitors from around the world and the EU.

If heads of state of EU countries, former EC presidents, and presently serving MEP’s in the EU Parliament are going to comment on the internal affairs of the United Kingdom (which is now, again, an independent country) then, it seems fair game that the UK government and media, and indeed all governments and world media, should feel free to report on everything that’s occurred in Catalonia since 1962. And that’s a very big story which has yet to see the light of day.

But it would make a fascinating documentary series showing how continental Europe supports freedom and democracy and a people’s right to self-determination in every continent — except on the EU continent!

Ouch! It must hurt when people catch you out like that, doesn’t it? And there’s more…

Should the UK and Other Countries Accept Today’s Implied Invitation by (former EC president) Donald Tusk, (Irish Taoiseach) Leo Varadkar, (EU MEP) Guy Verhofstadt and other EU politicians, to Engage in Some Reciprocity by Fanning the Flames of Separatist Movements Within the EU?

For many decades, Basque separatists have been waging a campaign against both Spain and France as the Basque people apparently want their own country within Europe and (unfortunately and reportedly) may have resorted to terrorist actions (at least, that’s what the media has reported, but to travel there, you’d never know it as it’s a very restful and peaceful part of the world) and again, brutal police and paramilitary clampdowns became the norm in the Basque region going all the way back to WWII.

Similarly, in Greece, where several sides within Europe attempted to ‘own’ Greece via economic and other means over the past 25-years (by lending the Greek government far more money than they could ever repay, for one example) and only the united power of economist and former Greek Minister of Finance, Ioannis “Yanis” Varoufakis and Greek Prime Minister Alexis Tsipras were able to (mostly) counter the silent takeover of Greece by certain EU political parties, institutions, financiers, etc., — official and otherwise.

We could also discuss the situation in Hungary, where Prime Minister Viktor Orbán has been waging a lonely battle against the EU autocracy since 2010 to maintain reasonable levels of immigration into his country and to retain Hungarian sovereignty vis-à-vis the overarching EU culture that wants to subsume the will of individual countries (especially small member countries) in favour of the EU’s better way — the “just eat it, it’s good for you!” mentality of dealing with member states.

And in France, millions of people have donned yellow vests (the so-called “yellow vest movement”) to protest high levels of taxation, which taxation is seen not only as punitive, but also (reportedly) targets groups, unions, certain segments of the French economy, and even individuals who aren’t toeing the government line.

There’s also the EU budget allotment procedure that rewards member governments that are compliant with EU diktats with generous funding and punishes those EU member nations that try to maintain control over key areas of their own economies as guaranteed by EU treaty.

It seems the EU people are the sweetest people in the world — but only when they’re getting their own way.

And that isn’t a way forward in the 21st-century, folks. That won’t fly. The entire world will join forces to stop you from again turning into the world’s bully (and that would be the 3rd-time we’d need to stop you from yourselves) within a 107-year timespan.

It’s time to grow-up kids and accept that life is a series of compromises and that you don’t always get your way.

It’s Astonishing that the Two Jurisdictions that Benefit the Most from the UK… Want to Sabotage that Relationship!

The Republic of Ireland economy would go into complete meltdown should the UK cease trading with it, as almost half its output is purchased by UK consumers. And it’s not like the EU is interested in buying Ireland’s goods, or they’d be buying it already! (Duh!)

Are These People Monsters Or Do They Simply Not Get It?

What kind of people would kick English taxpayers in the teeth by trying to break-up the United Kingdom, just so they can score some cheap political points and not feel quite as embarrassed about the UK’s departure from the European Union?

Really, these people are a threat to their own economies specifically, and to stability in the Western Hemisphere, generally.

Maybe have a word with them at the next election (Irish and Scottish voters) because if you re-elect them you’re practically guaranteeing that trade with England will be cut off forever and your passports will never again be valid in God’s country — the United Kingdom of Great Britain and Northern Ireland.

But if that’s what you want… Good Riddance! 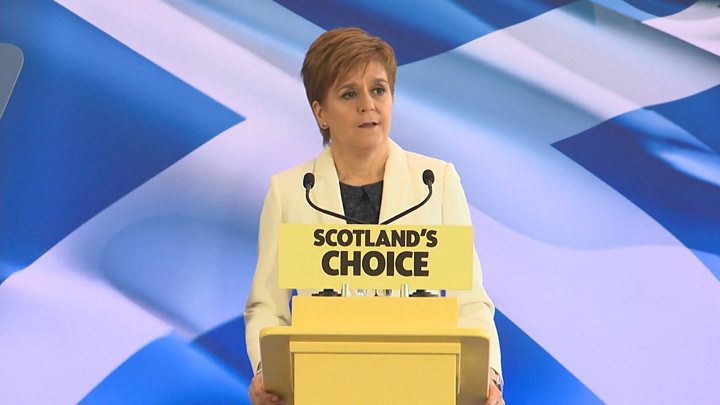 Scotland’s SNP leader Nicola Sturgeon must be the funniest person on Earth — because 4/5ths of Scotland’s trade comes courtesy of the United Kingdom — and British taxpayers subsidize the Scottish economy with billions of pounds sterling every year — and she wants to take Scotland out of the United Kingdom! Yet every time Scotland has a (supposedly, once-in-a-lifetime) referendum on Scottish independence from the UK, Scottish residents vote against her Monty Python-esque plan. Check yer meds, woman, or we’ll nominate you to lead The Ministry of Funny Talks! Image courtesy of BBC.com