Brexit: The Trigger for a New Atlantic Alliance

Britain, more than any other Atlantic Ocean nation, would benefit from an Atlantic Alliance free trade zone precisely because it is an island nation, and as such it depends on free trade and movement of goods in order to thrive to it’s full potential.

Since the Roman era Britain has enjoyed a historic presence in the Atlantic Ocean for good reason — island nations need regional trade to survive and international trade to thrive.

Japan set a wonderful example for all island nations in the postwar era, but never moreso since the Arab Oil Embargo of 1973 when U.S. consumers suddenly decided to switch their gas-guzzler cars for lower priced and more fuel efficient Japanese cars.

Not only were millions of cars imported from Japan over the following years, but because the necessary technology to build cars was transferable to home and personal electronics, Japan received a double boost to it’s economy every day since the Arab Oil Embargo.

From one of the worst performing economies in the world in 1946 to it’s peak as the #2 global economy in the 1990’s — the Japanese economic miracle rode its high quality manufacturing base that catered to the needs of billions of consumers. By any standard it remains an impressive accomplishment.

And now it’s Britain’s turn to shine as the world’s next booming economy.

Although much has changed since the oil supply shocks of 1973, the world economy continues to grow, with developing nation consumers seeing comparatively massive increases in their disposable income, presenting a wonderful opportunity for a Britain suddenly freed from an overly bureaucratic political union.

Therefore, let us count the ways that an Atlantic Ocean trading alliance (a free trade zone, that I propose be restricted to nations that front the Atlantic Ocean) could benefit Britain and the other Atlantic nations. 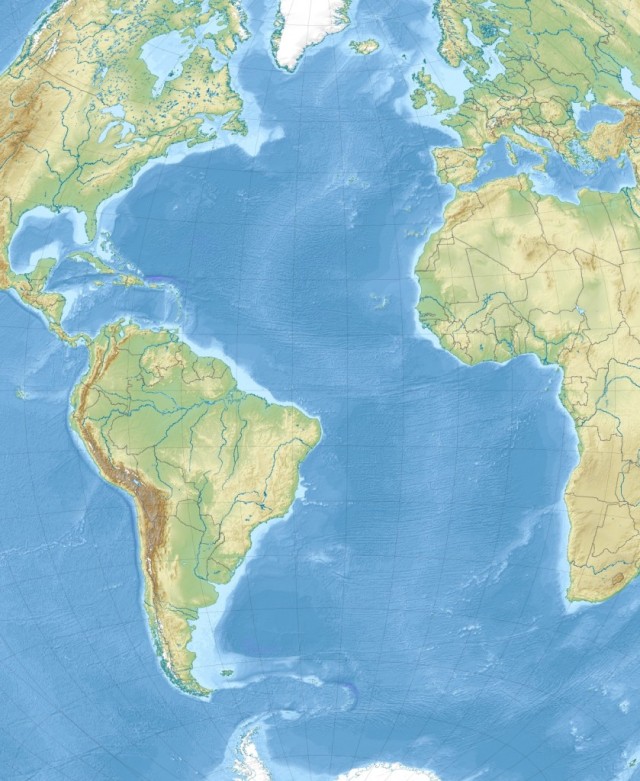 Britain, more than any other Atlantic Ocean nation, would benefit from an Atlantic Alliance free trade zone precisely because it is an island. Atlantic Ocean map. Image courtesy of Geography.name

In the North Atlantic, we have the United States, Canada, Greenland, Iceland, Ireland, the United Kingdom, Norway, France, Spain and Portugal.

And in South America, we have the South Atlantic nations of Argentina, Uruguay, and Brazil fronting directly onto the Atlantic Ocean — while French Guiana, Suriname, Guyana, Venezuela, Columbia, Panama, Honduras, Nicaragua, Belize, and Mexico and many island nations reside within the Caribbean Sea — which is of course, easily navigable to the open Atlantic Ocean.

All of these nations should receive a warm invitation to join such a trading block.

It is perhaps the best matchup of nations since the Bretton Woods Agreement of 1944. In the list of Atlantic and Caribbean nations, exist the most developed nations to the least developed, from the most overbuilt tourist locations to vastly underbuilt tourism markets, to the astonishing per capita petroleum and mineral resource base. Such opportunity abounds for those who pursue economic interdependence between Atlantic nations! From the most highly skilled labour to the cheapest labour, and among the highest cost real estate to the cheapest agricultural land in the world, everything that a developed or still developing nation needs can be easily found within this trading area.

The economic opportunities are uncountable, and they are sitting there untapped. At the moment, it’s a criminal waste of opportunity that must rank as a negative for every Atlantic nation whether developed or developing.

The obvious move here is for British Prime Minister Theresa May to voice strong support for an Atlantic free trade zone, contacting representatives of each country to find out what Britain offers, that can mesh with the needs of each Atlantic Alliance trading partner. And vice-versa.

Once some activity generates and some new trade begins to take shape, it would be wise to meet regularly to discuss standardization of regulations, whether shipping or other modes of transportation, financial, tourism, and other ways to work together. Even the baby-steps of working together to protect maritime shipping from at-sea piracy, or to form mutual aid groups designed to streamline hurricane or other natural disaster relief would demonstrate ways that Atlantic nations can work together for mutual benefit.

If the NAFTA model is used as the trading template, some of it’s terms could be adjusted to better suit the preferences of all Atlantic Alliance members, or it could be seen as the eventual goal for all members to reach at some point. At the very least it could be used as a reference point, a place to begin discussions.

By leading such an effort Britain would be well-placed — not to own the Alliance — but to offer it’s expertise and experience, so that the end result is a Win-Win for every nation involved. That is what makes for strong partnerships, and strong partnerships always make economic sense.