A brilliant group of academics and professionals have published a list of four questions that should be foremost in the minds of those wanting to negotiate a successful Brexit result as they navigate through the process of leaving the European Union.

These economists, lawyers, sociologists, and political scientists suggest that four important metrics need to be considered for any final Brexit agreement to be termed a “success” by a majority of Britons.

These seem utterly reasonable questions the public and policymakers can use to guide their thinking about Brexit over the coming months and years.

With so much focus on GDP growth and the export economy it was heartening to hear the Prime Minister speak about addressing inequality in the country, a problem not unique to Britain, but one which represents a gathering socio-economic catastrophe that rarely gets the attention it deserves. Kudos there, Mrs. May!

“As Mrs May has pointed out, judging Brexit is not just about GDP numbers, it’s also about creating a ‘fairer’ Britain – closing the wealth gap and expanding wealth and opportunity beyond London and the Southeast, as well as taking back control of borders and law-making.” — The Telegraph 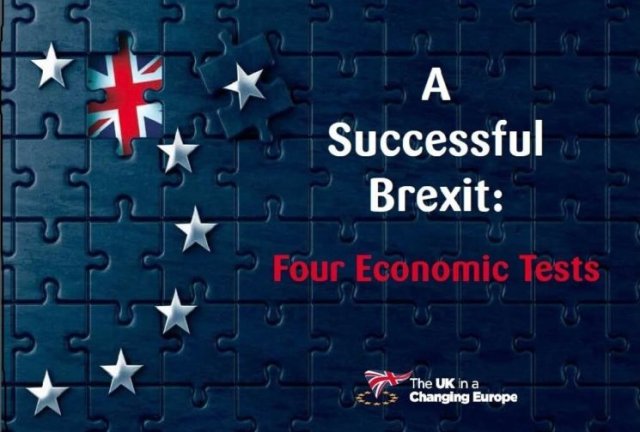 A Successful Brexit. Four Metrics to Guide UK Separation from the European Union. Image courtesy of The UK in a Changing Europe.

These are the right questions to be asking prior to the formal start of the Brexit process which Prime Minister Theresa May has said will commence March 2017 when the UK government triggers Article 50 of the EU constitution.

February 1, 2017: Supported by the Labour Party, House of Commons MP’s backed the government’s European Union Bill voting 498 votes to 114 (a majority of 384) to allow the Prime Minister to get Brexit negotiations underway. — Excellent BBC article here.

March 31, 2017: Self-imposed deadline set by the Prime Minister for informing the EU via the Article 50 clause that Britain wishes to exit the European Union.

After a long delay (which is typical in politics) things are going to get interesting, fast.

Once Prime Minister Theresa May triggers Article 50, the ball will be, as they say, in the European Union’s court.

The UK in a Changing Europe is an impartial and independent organisation created to make the findings of the best academic research easily available to the widest possible audience. This report was written by the initiative’s director Anand Menon and senior fellows Angus Armstrong, Catherine Barnard, Iain Begg and Jonathan Portes. The report in its entirety is available for download here (PDF). [Worth the read. – Ed.]

By Letter to Britain in Brexit, Britain, European Union on February 2, 2017.
← Theresa May: U.S. Republican Party Conference speech – January 2017 Britain’s Economy Firing on All Cylinders until 2050 →