Home » International Trade » Is There Enough Demand ‘Out There’ to Float a post-Brexit UK Economy?

Is There Enough Demand ‘Out There’ to Float a post-Brexit UK Economy?

Excerpt from Bloomberg News: “Chinese internet users have crossed the 800 million mark for the first time ever as of June 2018, according to the 42nd China Statistical Report on the Internet Development issued by China Internet Network Information Center. With 802 million internet users, China’s user-base is larger than the combined populations for Japan, Russia, Mexico and the U.S., according to International Monetary Fund data.” 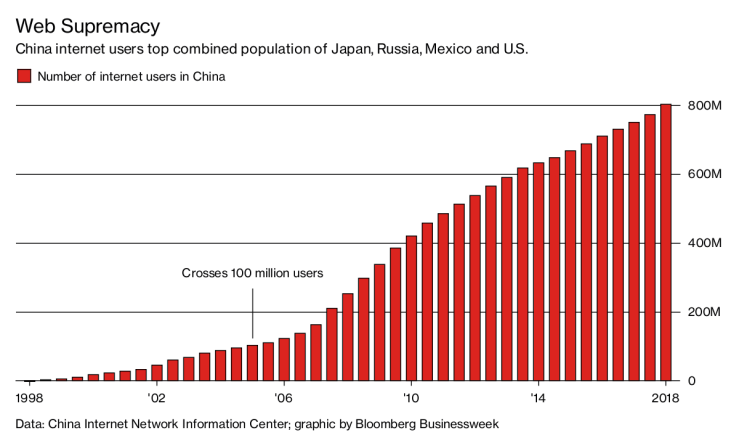 Some Britons wonder if there are enough business opportunities ‘out there’ in the wider world for the UK to thrive and prosper, post-Brexit.

As the graphic above shows, there are more internet users in China than there are citizens in all of the following countries combined: Japan, Russia, Mexico and the United States.

With internet use in China alone growing at an annual rate greater than the entire population of the United Kingdom you’d think that even the most inept exporters in the world would be lining up to trade with the huge moneypot called China.

Yet, because China isn’t selling itself as a huge marketplace for the world’s exporters and because Brexiteers haven’t ventured to research this part of the Brexit equation, it’s left to Bloomberg News (and me) to inform you of these astonishing developments.

Jacob Rees-Mogg’s European Research Group is a fine organization devoted to fleshing-out the political intricacies of Brexit, trade with the EU in the post-Brexit timeframe, and other Eurocentric matters. Yet, when we view charts like the one above it becomes startlingly clear that an Asian Research Group is needed to fully inform us about politics and trade with Asia in the post-Brexit era.

For example: How many Jaguar cars have been sold in the EU over the past 12 months?

And whatever that number is, it will be a static number for the simple reason that only so many EU citizens can afford a Jaguar motorcar and every one of them simply phones the local Jaguar dealership to order the Jag of their dreams and the car is delivered to their home a few days later.

Yet, I can only surmise that *isn’t* the case in China…

How many Jaguars *aren’t* being sold in China

How many Jaguar cars and SUV’s aren’t being sold in Asia because nobody bothered to research the full potential of the Asian market, or if they have, why aren’t Jaguar building three more factories in the UK to meet the demand of the rapidly growing Chinese middle class?

If internet users in China alone have risen from 22.5 million in year 2000 to 802 million partway through 2018, that demonstrates astonishing growth in their middle class. And if those people are ordering goods and services on the internet because their disposable income is rising fast, why isn’t there an entire department of HM government devoted to helping UK companies to get those online orders instead of just standing idly by and allowing other countries to snap up that business?

By 2030, there will be 1.6 billion internet users in China. How many Jaguar sales will have been lost by then?

It’s Not Only Cars…

Millions of pounds sterling are being lost every month since year 2000 because nobody in the UK government was put in charge of this.

Heads should roll over this shameful ‘oversight’ and not only in the government.

Heads also in the Bank of England, London School of Economics, London Stock Exchange and other organizations need to stop whatever they’re doing right this minute and phone whomever it is that can quickly address this stunning oversight.

Driving along the M4 on your way to the LSE right now? Have your driver pull the car over — you’ve got an important call to make — one that’s 18-years overdue.

With the right stewardship of the country, any good or service the UK produces should have seen the same kind of sales increases as the number of Chinese internet users since 2000. Disposable income is disposable income — and it’s better that UK business gets that disposable income rather than businesses from some other country.

From which, I can only assume that there *hasn’t* been proper stewardship of the UK economy since year 2000.

It goes without saying that nobody knew for certain how the internet was going to grow back in the early 2000’s, therefore, policymakers of that era are largely free of blame. But as each subsequent year passed, this should’ve been addressed with increasing urgency. Certainly, everyone on planet Earth knew by 2005 that the Internet of Things (IoT) was going to be a major part of our civilization in a few short years.

But the silence especially in the UK has been deafening.

As noted earlier, it’s not all about the UK-built cars that aren’t being exported to Asia in huge numbers.

Everything that the UK produces or manufactures in a year could be sold to China and the lot of it wouldn’t register a tiny blip on the Chinese financial charts as demand in the country is massive and it continues to grow at a geometric rate.

If the UK tripled its entire annual GDP in goods, services and produce and then shipped all of it to China, it still wouldn’t produce a blip on the charts. And China continues to grow its economy at (artificially held to lower than) double-digit growth rates.

Asia is the land of opportunity for all who have eyes to see and ears to hear. There isn’t a reason good enough for the UK government or British business to ignore it one more day.

By Letter to Britain in International Trade, post-Brexit, Theresa May, UK on August 26, 2018.
← Getting the EU to the Brexit Negotiating Table Battle of the Fishing Boats →