Battle of the Fishing Boats 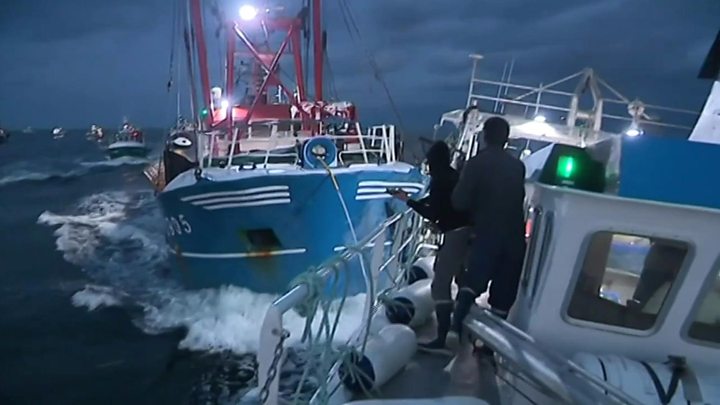 Fishing boats from France and the UK clash in international waters off the French coast.  Image courtesy of BBC.

It seems the French government passed a law that only French fishers must obey, but those French fishermen and fisherwomen were upset (inexplicably… not at their own government, but at the British fishers who were merely exercising their legal right to harvest scallops in international waters) and chose to throw large stones at the British boats and crews (breaking some windows in the UK fishing boats) and (dangerously) shot flares across the decks of a British fishing vessel.

It needs to be said again, that the British fishers were operating legally in international waters and following all EU and UK laws.

French law has only the power to restrict French scallop fishermen and fisherwomen — and the actions of the French crews aren’t acceptable in a civilized world.

If French fishers have a problem with French law… they need to take it up with the government of France. Full Stop! (Arrêt complet!)

When EU and UK fishers operate in British waters they must follow all relevant EU and UK laws even if they must toss millions of tonnes of dead fish overboard every year — because under EU law — if the fish are not of a certain size they must be thrown back (dead or alive) into the water. Which has a devastating effect on the UK fishery and the larger North Sea fishery. How could it not?

Yet for some reason, French fishermen feel they have the right to threaten and assault UK fishers and damage British fishing vessels that are operating legally in international waters.

French fishers feel they can assault UK fishers because they feel ‘entitled’ to do so — even though the UK boats were operating in international waters and were following all relevant fishing laws of the EU and the UK.

It’s certainly not the fault of UK fishers that the French government banned French fishers from scallop fishing from May 15 to October 15!

Feelings of ‘entitlement’ by French fishermen and fisherwomen is perhaps symptomatic of a larger problem throughout the European Union; EU citizens feel ‘entitled’ while UK citizens feel they themselves must always follow the law. See the difference in mindsets?

Perhaps it’s just one of many reasons that the first time Britons got a chance to vote on EU membership they voted to Leave… but I’m sure that reasoning (causality?) was lost on those French fishermen during the heated exchange at sea.

Let’s hope the UK fishers take the French fishers/vandals to the European Court of Justice (ECJ) and that damages are awarded to the innocent UK fishers. If not, we’ll know that the EU doesn’t practice what it preaches…

By Letter to Britain in France, London Fisheries Convention, UK on August 30, 2018.
← Is There Enough Demand ‘Out There’ to Float a post-Brexit UK Economy? How Canada and the UK Could Work Together post-Brexit →