As far as years go, UK Prime Minister Theresa May must be glad to see the end of 2017 as are many others in Britain and around the world. In matters Brexit, it was a year of low-level chaos and unfulfilled expectations — lots of ‘churn’ but not much actual progress.

Yet the Prime Minister did make some exceptional speeches and unexpectedly reached-out to EU citizens to assure them that while Britain was leaving the European Union, it wasn’t leaving Europe. Well done on both counts, Theresa.

She also told EU citizens living in the UK that their situation wouldn’t change, aside from having to register their residency with the Home Office and pay a nominal fee to retain their ‘settled status’. And while that didn’t seem to impress small numbers of EU negotiators, it brought great comfort to millions of expats living in Britain.

Of course, it’s all contingent upon reaching a final ‘Withdrawal Agreement’ between the United Kingdom and the European Union, but it’s not too much of a stretch to suggest that the UK would act unilaterally to guarantee the rights of EU citizens working or studying in Britain in the case of no agreement.

Theresa May also offered £40 billion of UK taxpayer money to the European Union; Everyone is unclear what this is for, as nobody from the government has bothered to explain it to citizens.

Many people think that the UK’s share in the EU Parliament buildings and in other EU properties and assets should be sold off to the other EU27 members and the £9.65 billion (estimated) value could be used to pay future UK liabilities to the EU and that there is no need to pay £40 billion. Which seems reasonable.

If there is an actual need for the UK to pay £40 billion to the EU, surely British taxpayers have the right to know what they’re paying for, and to whom.

But if Theresa May has agreed to continue paying the £8.6 billion annual net payment to the European Union until Brexit completes within 2 years (approximately) plus 2 more years to cover the transition period, then that seems pretty reasonable too. If that’s how the £40 billion is being arrived at, there’s not much to complain about there.

With all this reasonableness going ’round it’s no wonder that EU negotiators agreed to move to Phase II of the Brexit negotiations — trade — a hyper-important part of the post-Brexit relationship on both sides of the English Channel.

Negotiating a mutually beneficial trade agreement between the UK and the EU in 2018 is Job Number One for negotiators on both sides.

Which makes the whole ‘getting an agreement’ discussion largely academic — as there will be an agreement or hundreds CEO’s on both sides of the English Channel will be breathing fire down the necks of UK and EU negotiators every day until an agreement is reached. “Don’t even think about coming home without an agreement!” (Yes, just like that) 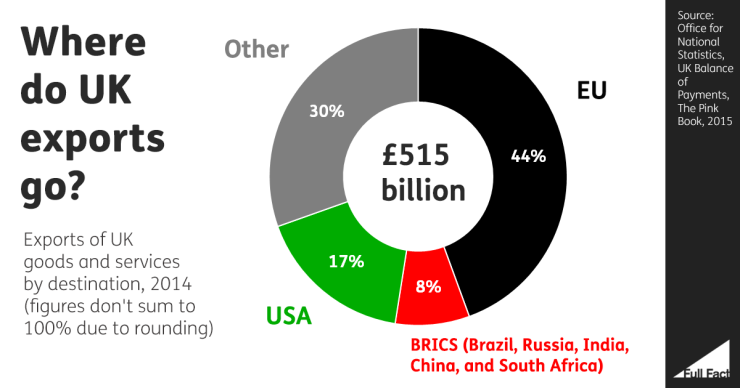 Everything you want to know about the UK trade with the EU. Image courtesy of FullFact.org and the ONS.

Which is a very good thing.

And because companies on both sides need to keep their biggest export market open and flourishing, there absolutely will be a reasonable trade deal — one that both sides can live with. There is simply no alternative.

Which neatly explains the title of this blog post ‘Theresa May’s New Year of Hope’ because Job Number One for Brexit negotiators on both sides must be working a successful trade deal — and every CEO in Europe will be watching with keen interest, to put it very mildly.

You don’t want to be the trade negotiator coming home without a deal and having to tell the CEO of Volkswagen or BP that you were too incompetent to get a deal. Yikes!

There will be an excellent UK/EU trade deal in 2018, a trade accord that both sides will be rightly proud of — one that works for CEO’s, citizens and governments throughout Europe.

As the focus will be on trade in 2018 (something that both sides must preserve if today’s politicians want to keep their jobs) the new year looks to be one of the better years for relations between the UK and the EU27.

Let’s hope that Phase II of the Brexit negotiations move smartly along and that (if a Phase III is required) the momentum that gets built throughout 2018 works to facilitate friendly and workable solutions to any remaining issues between the two blocs.

Politicians and negotiators on both sides of the Brexit divide have everything to gain by bringing home a fair and workable trading agreement and everything to lose if they don’t.

Therefore, let 2018 be ‘The Year of Hope’ as 512 million European citizens are counting on their politicians and negotiators to open windows of opportunity as big as the sky, and to create even more justice and fairness for all Europeans, no matter where in Europe they may live, work, or play.

No matter which side of Brexit you’re on, we at Letter to Britain wish you a Happy, Safe, and Prosperous New Year!