Home » Brexit » Instead of fighting for market share, it’s time to grow the global market!

Instead of fighting for market share, it’s time to grow the global market!

The days of ‘Win-Lose’ politics are over

When every second country (seemingly) has WMD weapons, suddenly Win-Lose doesn’t work anymore. Do we really want to solve every issue between nations with nuclear weapons? Because eventually, that’s what it will come to.

It’s great if you ‘Win’. But then you ‘Lose’ because the fallout from large nuclear explosions travel around the Earth a few times per season and nuclear particles continue to exist in the environment for decades (some isotopes linger for 20,000 years) and as everyone needs to breathe the air, eventually you will inhale and, well, (do I really have to tell you this?) your lungs will filter the radioactive isotopes out of the air.

The ‘Winners’ of a WMD conflict will also become ‘Losers’ of that conflict within months. It’s nonsensical to consider nuclear war in the 21st-century.

All of which means, that in the final analysis, international hot points must henceforth be solved by the cool hand of diplomacy.

The days of fighting for Market Share are over

Larger countries with serious export expertise and fully developed and long-term foreign client relationships have a distinct advantage over a born-again United Kingdom re-entering the exporting world. Fighting for market share against far superior marketing superpowers like Germany and China is like paddling upriver in a hurricane, and good luck with that.

Rather than fighting for Britain’s slice of the pie, the UK should be the one country in the world that works to make the pie bigger for everyone! wherever free markets exist.

In that way, whatever global growth occurs will benefit all exporters equally — including Britain’s born-again export economy, because the UK will have as good a chance as any to capture some of that growing pie — as opposed to fighting companies well entrenched in foreign markets and trying to steal tiny percentages of their total market share. See the difference?

“Don’t fight a battle if you don’t gain anything by winning.” — Erwin Rommel

Rommel was right. And to adapt his truth to Britain’s new place in the world, fighting for market share in countries that are already well-served by European and Chinese exporters will gain British exporters very little and could create trade frictions between Britain and the European Union which is still the UK’s largest trading partner in the 21st-century. We don’t want that.

‘Win-Win and Growing the Market vs. ‘Win-Lose’ and fighting for Market Share

Win-Win political thinking and growing the global market is the best prescription for Britain’s economic future.

Countries with rapidly growing economies like the BRICS countries and many Commonwealth nations are the best places for Britain to concentrate its export efforts. By helping those countries to succeed more than they would have without the UK’s assistance, Britain can grow its export base by selling to people in rapidly growing developing nations enjoying their newfound discretionary income.

It’s all about rising Disposable Income in Developing Nations

The example of India is most poignant, because in that country the average discretionary income of citizens is doubling every five years; All Britain’s leaders must do now, is to work respectfully with Prime Minister Narendra Modi and his ministers to the end that British exports to India are welcome and that Indian exports to the UK are just as welcome. (It helps if both countries aren’t manufacturing and selling the same items, of course) If India sells toasters in both countries then Britain should sell kettles in both countries, if you take my meaning. The less overlap, the better.

A few years from now, when a larger percentage of India’s 1.5 billion population can afford to buy a new car, perhaps Indian companies will offer tuk-tuks, small cars and farm trucks for sale in India and the UK, while the UK sells family sedans and Landrovers in India and the UK.

With the right approach to rapidly growing countries and some standardized and respectful trade rules, the UK could help to grow the global pie, dramatically increase its own exports, keep good relations with exporting superpowers in Europe, China, and America, and be seen as a ‘White Knight’ to developing nations by playing a pivotal and ongoing role in helping them to build their economies.

That future is so much better than bickering over fractions of market share with other (and economically superior) exporting nations — the very countries that Britain depends upon in many ways.

Here’s to ‘Win-Win’ paradigms and growing the global economic pie; A plan that will work for the United Kingdom more than almost any other country — while preventing harm to Britain’s present and important trade relationships. 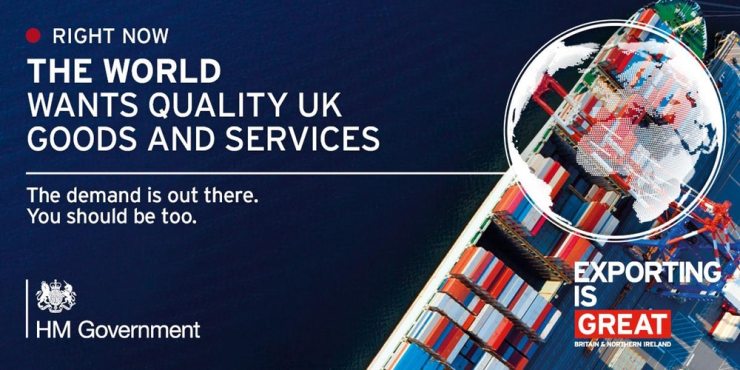 The world wants quality UK goods and services. The demand is out there. You should be too. Image courtesy of HM Government.