The UK Parliament voted today to hold a UK General Election on December 12, 2019 which should help end the present Brexit impasse in the House of Commons.

Some 3.5-years after the June 23, 2016 referendum a majority of Britons voted to leave the EU (that’s 1,223-days ago!) and the UK is no closer to leaving the EU. So with the House of Commons deadlocked, Prime Minister Boris Johnson pressed for a General Election to allow their bosses (the UK People) to decide the future of the country. Smart!

A Quick Look at the Brexit File:

With polls favouring the Conservatives and their lead increasing, it might be a tight race. 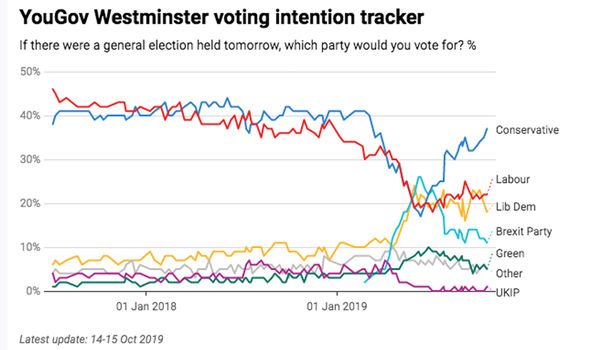 Certainly the ruling Conservatives are a known quantity, in power since May 11, 2010; First with PM David Cameron until June 24, 2016, followed by PM Theresa May until July 23, 2019, and now, PM Boris Johnson since July 24, 2019 — while Labour hasn’t formed a government since PM Gordon Brown stepped down almost a decade ago.

The only way Labour can manage to stay-on as the official opposition is to run on anything but their Brexit platform, and instead, run on what they could do for the NHS, for low-cost housing, for worker’s rights and other social issues, IMHO.

While this election shouldn’t be all about Brexit, it will be for a majority of voters who want 3.5-years of economic uncertainty to end and they know the Conservatives will deliver.

The issue of our times, at present, is Brexit. And that’s what The People will be voting for, or against.

Based on nothing except that I always get these things right… hehehe, here are my UK General Election 2019 predictions.

The Conservatives will form a small majority government, Labour will gain many seats — while the Lib Dems, the SNP, and independent MP’s will take a beating at the polls. The Brexit Party will become the 3rd party in the House of Commons behind Labour, while the Greens and Plaid Cymru will barely hold onto their existing seats. UKIP won’t win a seat.

Whatever happens, I hope that every MP who is dedicated to serving their constituents does well in this election no matter what side of the Brexit divide they’re on.

Good MP’s like that are worth their weight in diamonds. Good luck, MP’s!