Home » Donald Trump » How a Tiny Tariff Could Change America

How a Tiny Tariff Could Change America

As the debate heats up over President Trump’s 25 per cent steel tariffs and 10 per cent aluminum tariffs (some countries are exempted by Presidential Order) it’s interesting to look at other scenarios that might play out better for the United States — and for other countries too.

First, let’s look at the scale of the American trade deficit problem, then we can compare different methods to adjust trade flows to help the United States avoid a projected $880 billion trade deficit with the rest of the world by FY 2019. No country, not even the mighty United States of America can withstand annual trade deficits of that magnitude.

At the moment, America’s biggest trade deficit is with China ($215 billion/yr) followed by Japan ($68 billion/yr) and Mexico ($65 billion/yr) while many other countries run double-digit trade deficits against the United States. In totality, such trade deficits are simply unsustainable for the U.S. and President Trump is right to address the issue, however, there’s always more than one way to accomplish a thing. 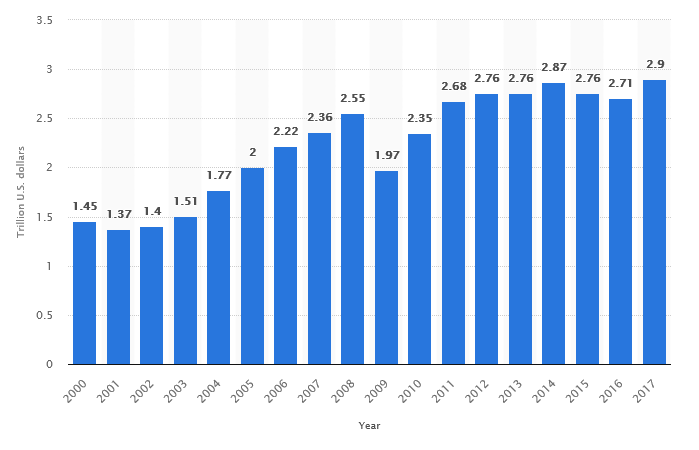 The Nature of the Problem

America’s trade deficit is an astonishingly simple problem that has developed over four decades — because when a thing evolves without proper guidance and oversight, eventually it becomes the thing that eats you — which is what’s happening to the United States in the 21st century.

Because policymakers allowed this monster to grow, it means the U.S. will import $557 billion more than it exports in 2017, instead of maintaining a normal balance of trade like other countries. And 2018 is projected to produce an $880 billion trade deficit for the United States, with a $1 trillion trade deficit sure to arrive by FY 2020 if action isn’t taken to address this catastrophe.

President Trump claims that the American trade negotiators of previous decades were ‘weak’ and got ‘out-negotiated’ by other countries and blames them for the present (uncomfortable) moment. But that isn’t accurate. However, it plays well with voters, and media outlets especially, thank Donald Trump for that characterization.

What happened is that America opened trade with China and other developing nations beginning in earnest in 1974, allowing generous trading terms to add impetus to America’s trade liberalisation goals. American policymakers assumed that once those developing nations got a real economy going, citizens of those countries would then purchase billions of dollars of American goods and the gamble would pay off handsomely. And therein lies the problem. Not every country reciprocated America’s largesse.

China, Japan, and other countries simply grabbed the Americans by their largesse and began exporting evermore billions of dollars worth of goods and services to America without buying much of anything from the United States.

Note: In Japan’s favour, the country’s carmakers aggressively lobbied Washington to be allowed to build factories throughout the United States and Canada which provided thousands of jobs across North America every year since 1987. Also, Japan bought hundreds of billions of dollars worth of U.S. Treasury Bills to help maintain the American economy. These wise actions ameliorated the concerns of U.S. legislators about Japan’s trade imbalance with the United States from 1987-2017.
Which should qualify Japan for a ‘Free Pass’ from all steel and aluminum tariffs IMHO, as Japan was led to believe by American legislators that their actions neatly covered any trade negatives in the U.S. / Japan relationship.

Asleep at the Switch?

The problem, therefore, isn’t that America got ‘out-negotiated’. The problem is that certain countries took advantage of America’s generous trade terms but were reluctant to accept imports from the United States.

Whoever was in charge of international trade in the U.S. from 1990 until 2018 should have Fried in Hell for not raising the alarm and writing some appropriate ‘fair trade’ legislation that would serve as a check and balance against such one-sided trade flows.

Countries that run trade surpluses of less than $10 billion/yr with the U.S. shouldn’t face American tariffs as those numbers typically go up and down many times over the course of a decade and can even reverse direction to America’s benefit, and in any case, rarely become double-digit or triple-digit trade imbalances.

But once a country hits the $10 billion trade deficit threshold with the United States, it should trigger alarm bells from Alaska to Maine and appropriate tariffs (like Donald Trump’s high-ish steel and aluminum tariffs) should automatically apply on exports to the U.S. from any country that surpasses the $10 billion tripwire.

It’s such a good idea that every country should do it.

If the United States charged a truly nominal 5 per cent tariff on every foreign good and service it would raise $150 billion per year which is a substantial amount of money for any country, even a superpower.

The U.S. could use that money to subsidize American companies hit hard by low-priced imports since 1990 (maybe by providing financing assistance to allow them to build newer, more energy-efficient factories for example), to improve transportation corridors throughout the country (especially near America’s seaports), to upgrade the actual port facilities to allow for faster and more efficient throughputs of American products being shipped overseas, and to enhance security at every single U.S. port of entry.

This too, is such a good idea that every country should do it.

If the United States adds a nominal 5% tariff to all foreign goods and services, and then on top of that tariff penalizes (with industry-specific tariffs) only the countries that run more than $10 billion trade deficits with the U.S., the entire problem will be solved within 5 years and the American economy will boom like never before.

Also, in a booming U.S. economy, countries like China will find that orders from America will increase and any losses felt now will be recovered within a year or two.

The only way to conduct international trade is with respect, with proper checks and balances, with mild tariffs designed to make corrections to uneven trade flows resulting from poor policy in previous decades, and none of it needs to be confrontational or nasty.

For the sake of its hard-working citizens, American policymakers must address these imbalances in a businesslike way — not to punish other countries — but rather, to ensure that every country that trades with the U.S. is doing so in a fair and transparent manner.

By Letter to Britain in Donald Trump, International Trade, United States on March 25, 2018.
← To Xi With Love, from Donald Trump Transferability – The Solution to Systemic Bottlenecks in the NHS →