Bombardier Aerospace, headquartered in Montreal, Canada, also employs some 4000 people in Northern Ireland who produce a significant percentage of the components used in the C-Series passenger jets (CS 100 and CS 300) that have recently entered production.

Switzerland has already taken delivery of some of their C-Series jets, with others to be delivered in the coming months. Airlines from Germany, Finland and other European nations have indicated huge interest in these modern and fuel-efficient airliners, and China has told the company they will take as many planes as Bombardier can produce. 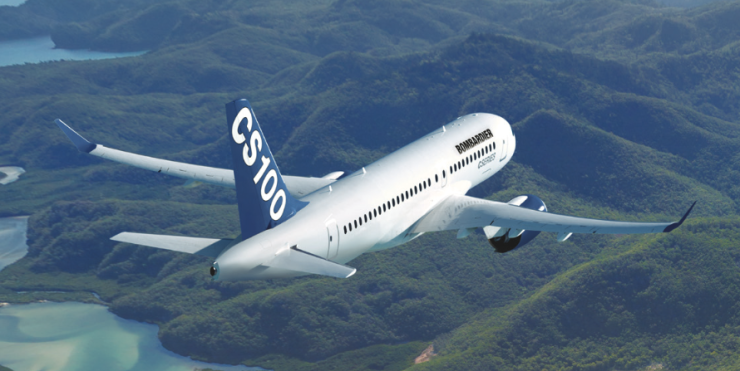 There isn’t a better commercial aircraft in the 100-150 seat market in the world today.

And if that sounds like advertising copy, it’s because the aircraft the C-Series competes against were originally designed in the 1970’s (Boeing 737) and 1990’s (Airbus) and early 2000’s (Embraer) and although those aircraft lines have received numerous upgrades over the decades, from an engineering point-of-view nothing beats starting with a clean sheet.

This allows designers a free hand to use the latest composite materials, fully digital electronics instead of digital-over-analog, and 100% CAD/CAM design and manufacturing instead of only part of the process being CAD/CAM (Computer Aided Design/Computer Aided Manufacturing) all of which means there are no engineering compromises.

When you have the best plane on the market in that particular segment, one that boasts the quietest takeoffs and landings (significantly quieter) and the best fuel mileage, and the lowest maintenance cost per mile — high tariffs in one country means you simply sell the same number of aircraft per year — but you sell them to different countries.

China can’t get enough commuter aircraft from all sources it seems, and its own fledgling passenger aircraft manufacturer is geared towards truly excellent jumbo jet airliners. The country needs almost 7000 new aircraft over the next 20-years.

All good news for Bombardier there! The company should easily score 1/3 of all single aisle passenger jet sales in China over the next 20-years. And if they can’t, the entire executive staff of Bombardier should be exiled to Antarctica for life. Yes folks, opportunities like this don’t come along once-per-decade, nor even once-per-century.

Just in case you’re counting along at home; If the company receives 1/3 of all single passenger jet sales in China over the next 20-years, it would need to deliver 6-jets per day to China.

The future couldn’t be brighter for Bombardier and its clients. A missed deal with the United States might in retrospect turn out to be the best thing that ever happened to the company. Instead of thinking ‘regional’ — it’s now time to think ‘global’ — thanks to the U.S. Commerce Department.

Trade war, schmwade war! In the 21st-century, the name of the game isn’t getting into fights with your competitors, it’s about out-succeeding them.

Remember your pilot’s etiquette now; Always dip your wings ever-so-slightly (in respectful salute) every time you pass your competition! 😉