Why Vlad Putin’s Re-election is Good for the West

Western leaders should be pleased that Russia’s President Vladimir Putin has been returned to power in Russia’s March 18 presidential race capturing 77% of the vote in what appeared to be an easy win for the four-time Russian president.

From the West’s point of view, the worst thing in the world would be a weak president in Russia (or any nuclear power) who could be replaced with a known or completely unknown person in the midst of a political crisis.

Even worse from the West’s point of view, would be a military coup. Western politicians simply don’t understand the mindset of normal Russians or their politicians, let alone the Russian military mindset!

While no one can deny that Mr. Putin is in business for Russia and that he wants to build the country into an economic powerhouse, he has delivered surprisingly moderate foreign policy that allows it to compete with other industrialized nations and he has played a helpful role in the verbal altercation between North Korea and the United States.

He continues to be an active force for good in institutions such as the United Nations, the BRICS countries, the SCO (Shanghai Cooperation Organisation), OPEC, the GCEF (Gas Exporting Countries Forum) and more.

Here’s a nice graphic that shows how important the BRICS economies are to the overall global economy. 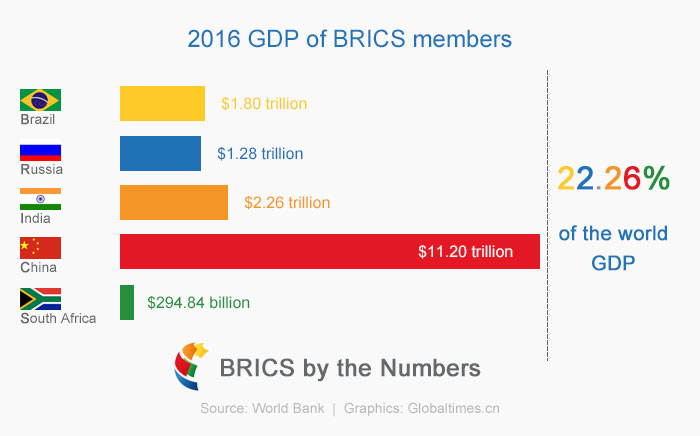 The combined GDP of the BRICS countries (Brazil, Russia, India, China and South Africa) will outpace the G20 countries prior to 2050, by the way.

Unfortunately, Russia-bashing is popular in some foreign capitals and it seems centred around Russia’s infinite resource wealth and jealousies over a total land area that makes it the largest country in the world by a significant margin.

You will find more infographics at Statista

His domestic policy has improved the lives of older Russians who suffered the hardships of two world wars, the Cold War, and the ever-present brutal weather, building Russia into what it is today. Yes, Russia’s senior citizens love Vladimir Putin who would vote him President for Life if it weren’t for the term limits on presidential office.

It’s a credit to Mr. Putin that he didn’t attempt to change the constitution of the Russian Federation in order to serve more than two consecutive terms as President, instead serving as the country’s Premier from 2008-2012 until he was once more eligible to run for the country’s highest office.

Even during the 2008 global recession and following an unprecedented downward spike in the global oil price, the Russian economy continues to perform better than expected and Putin has created hundreds of thousands of jobs across the country in almost every segment of the economy.

Any election where the incumbent wins 77% of the vote, that person can only be considered a hugely popular and unifying figure, and there is a bit of ‘Putin-mania’ during elections in Russia. The other candidates just can’t compete with that level of popularity even if they have decent or even enlightened policies on offer. Which says it all, doesn’t it?

The citizens of the relatively new Russian Federation (managed democracy) experiment and its predecessor the (communist) Soviet Union have lived an utterly different reality than the West since 1917. While Russians may look like us and even act like us, their society is different from Western society in many ways.

And that’s especially true during a crisis of any sort where Russians drop their differences no matter how strident their positions and view any outsider as an enemy of the state and as a deeply personal enemy.

It’s easy to see this in action. Every time someone in the West attacked Vlad Putin publicly, his popularity rose by another 10 per cent. Maybe Vlad will send his political enemies in the West a nice bottle of champagne to thank them.

But whether Western politicians are jealous of Putin’s constantly high polling numbers, his landslide election result, the size of the country he leads, or the astonishing resource wealth of the country, every politician in the world should breathe easier knowing that we’ll be dealing with the same Vladimir V. Putin for the next 6 years — and not someone unknown.

We know who Mr. Putin is and although we might not always agree, we know he doesn’t care to press nuclear buttons, or start brushfire wars in faraway places to boost his popularity.

Not that we should ever kowtow to Mr. Putin. But we know who we’re getting. And minor irritations aside, the West should breathe a huge sigh of relief and be thankful that a new Russian president didn’t arrive on the scene wanting to turn modern-day Russia into an amped-up Soviet Union — for just one example of how it could go bad for the West.

Congratulations to President Vladimir Putin on another successful run for presidential office, for knowing what is important to the people of Russia, and for working his pragmatic plan to give it to them. Три приветствия! (Three cheers!)