Home » Britain » Indyrefs Until Nicola Gets the Answer She Wants

Indyrefs Until Nicola Gets the Answer She Wants

Q: How many Scottish Independence referendums will there be, Mum?

A: As many as it takes for Nicola Sturgeon to get the answer she wants, dear…

Which will be more than the advertised ‘once-in-a-generation-vote’ of the original referendum on Scottish independence.

“Senior Nationalists called the referendum a ‘once in a generation’ event. Alex Salmond and Nicola Sturgeon both signed an agreement with stating they’d respect the result. Ms Sturgeon went on the record saying she ‘wouldn’t have the right’ to ask the question again unless views changed.

These turned out to be hollow promises, every one.

Absolutely everything the SNP has done from referendum day to now, has been geared towards engineering another vote.

Despite losing her majority in May, by June Nicola Sturgeon was back at it – using the EU referendum as a catalyst. Instructing officials to start drafting another independence referendum Bill within four hours of the Brexit result.

It is unjustified, infuriating and wrong. It denies the democratic verdict of the 2014 referendum. It breaks Nicola Sturgeon’s own word. It ignores every bit of polling evidence which suggest Scots don’t want another referendum, and that Brexit hasn’t materially changed views on independence.

And it is terrible for Scotland’s economy.” — The Telegraph

In the space of only 30 months and against her own promises, the First Minister of Scotland Nicola Sturgeon is proposing another referendum on Scottish independence (Indyref) in the hopes of getting the results she missed by a healthy margin during the last Indyref held in September 2014.

Here are the 2014 results as recorded by the BBC

Breakdown: Here is the referendum result by Council. 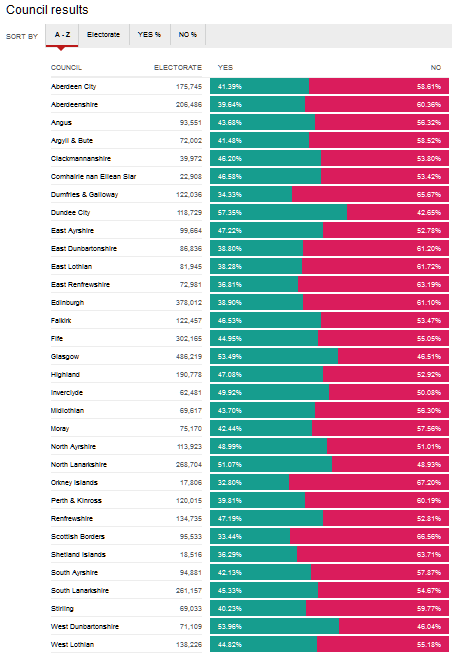 With 84.59% of eligible voters turning out to vote in the referendum, the ‘No’ result can’t be blamed on poor voter turnout. It must be something else.

Maybe it’s that the Scottish people know they have ‘a good deal’ with the rest of the United Kingdom, or that they are a people who respect the many and historical links between Scotland and the other members of the UK and Commonwealth, or that they feel their future is inextricably linked with everyone else on the island, or that the case for Scottish independence simply wasn’t compelling enough. It could be all of that, and more.

Whatever their reasons, 55% of eligible Indyref voters in 2014 chose to stay in the United Kingdom.

The question that hasn’t been answered by Nicola Sturgeon;

What’s changed ‘the case for’ Scottish independence vs. 30 months ago?

Something must have changed to make Nicola think there would be a different referendum result or she wouldn’t be calling for a second referendum on Scottish independence.

The Scottish people and the other members of the United Kingdom are entitled to know exactly what has changed that would suggest a different Indyref result.

Otherwise the people of Scotland will simply duplicate the time and expense of a second referendum to arrive at a similar result.

Inquiring minds (and the people paying for, and affected by) a second referendum deserve to know…

By Letter to Britain in Britain, Nicola Sturgeon, Scotland, Scottish Independence on March 14, 2017.
← Should Theresa May Guarantee the ‘Rights’ of EU Citizens Living in Britain? Brexit Begins: March 29 →