The biggest boon to UK trade in this century has just arrived in London with astonishingly little fanfare.

China, the largest exporter on the planet, has just linked its rail system to the UK as part of its One Belt, One Road initiative to promote global trade.

“China launched its first freight service to the United Kingdom on New Year’s day, according to the China Railway Corporation.

The service runs from the Chinese city of Yiwu, in the country’s eastern Zhejiang province, to Barking in London. The journey lasts for an average of 18 days and more than 12,000 kilometers, according to a Chinese government website.

The route will “revolutionize the way freight is moved from China,” Mike White, director of its U.K.-based arm, Brunel Shipping, told CNBC via telephone.

He explained that freight transport by sea from China to the U.K. can take twice the time of the new rail link. Also, it offers the potential for “huge savings” on existing air routes.” — Justina Crabtree MSNBC

For China, the One Belt, One Road initiative will eventually surpass even Chairman Mao’s Great Leap Forward where 600 million people were lifted out of abject poverty in a herculean effort that lasted 40 years. China’s trade with Europe and the rest of Asia is about to leap forward by one order of magnitude, and every economy the rail line passes through will advance accordingly because of it. 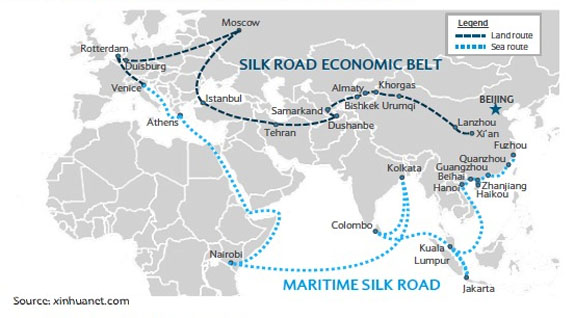 UK – China trade will be revolutionized by China’s One Belt and One Road initiative first unveiled by Chinese leader Xi Jinping in 2013.

For the UK, there’s no excuse good enough (no, not even Brexit!) to miss the opportunity to become a major player in this global rail link. The Prime Minister should drop everything and phone President Xi Jinping to congratulate him on this vision that is EurAsia’s newest and most hope-filled reality.

Theresa May should very politely but assertively ask for the rights to purchase advertising on at least 20% of the railcars that travel that rail line in the interests of promoting British tourism, British universities, British products, and to advertise the great development work that The Commonwealth does around the globe.

Let’s get the website URL’s painted on those railcars this month!
We can worry about adding fancy graphics, later.

And when people visit those sites let’s ensure that every language is available on the website, especially the languages that are spoken in the countries those railcars pass through. (Otherwise, what’s the point of advertising?)

Getting the UK Brand out there

Instead of letting government departments and UK businesses approach China’s Yiwu Timex Industrial Investment Co. (the owner-operators of the rail service) in a piecemeal approach, this is the time for LEADERSHIP by a great Prime Minister!

“President Xi, I’ll take 20% of the boxcar advertising that travel along that route. Alright with you? Wonderful, here’s the money. I have the graphics specs for you now. We’d also like an option for a further 20% of your China-to-UK railcar advert space for our Commonwealth partners. Back to you in a week on that.”

China – UK trade. Instead of “Exporting is Great” it could just as easily read “Aston Martin cars are Great” or “UK Tourism is Great” or “British Universities are Great” along with the relevant website URL.

Here’s another example of a splashy graphic that could be painted on the sides of China-bound railcars that depart from the UK. Of course, the text on the railcars should be written in every language spoken along the rail route.

UK Tourism – Heritage is Great! And so is advertising on the side of China-bound railcars.

Even the railcar advertising from earlier generations was effective. The following photo shows a railcar that hauled wheat and legumes with 1970’s-era Canadian government advertising painted onto the side of the railcar.

Britain could purchase advertising space to promote British industry and tourism on the side of China to UK railcars. — Image courtesy of Bill Grandin

It’s great to be diplomatic, and it’s great to have G20 meetings — but it’s opportunities like this that can result in virtuous cycles (economic multipliers) that drive an economy forward.

It’s the sort of thing that’s so important you must push yourself into the lineup, instead of being a wallflower and letting every other country get the prime advertising space, first. And we know that’s not the way politicians usually proceed, but as Winston Churchill used to say, “If you can’t get something done yourself, hire the best to get it done for you.”