Hitting the Right Note with Russia

It may surprise some that for hundreds of years Britain enjoyed a good working relationship with Russia mainly via their respective Royal Families, and that the Allied Powers received especially valuable cooperation from the Soviet Union during WWII. And after the breakup of the Soviet Union, Britain once more enjoyed a strong relationship with Russia and it’s leaders.

Russia has much to offer Britain — especially in light of the Brexit vote. It’s a country rich in oil and gas, metallic ores and minerals, and in forestry and agriculture. In short, all the resources that a developed nation needs. 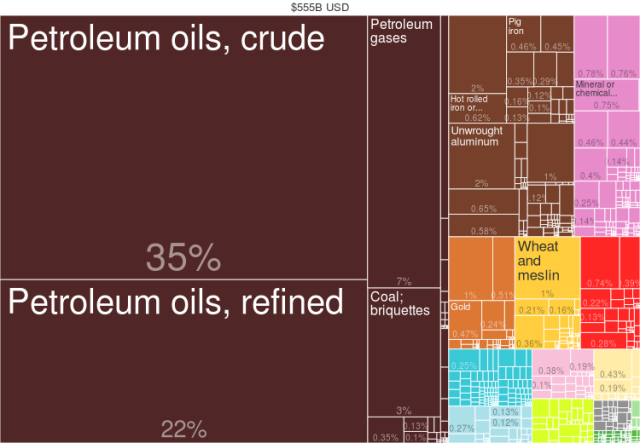 Britain needs all these things to grow its economy. Treemap of Russia exports (2014)

But more than that, Russia is a rapidly modernizing nation with 146 million consumers who have displayed a distinct appetite for travel and for European history.

Buying massive amounts of raw resources from Russia, adding value to them, then exporting them to the global marketplace is a natural for the United Kingdom. In this way, the future of Britain would be inexorably linked to Russia and in a mutually beneficial way. As demand for value-added goods rise, so will demand for Russia’s resources.

This is the kind of symbiotic relationship that Britain must advance with Russia, as it’s the only model that is a ‘Win-Win’ for both nations.

Therefore, Win-Win is the only acceptable course for Britain in regards to Russia.

During WWII, the level of cooperation between the former Soviet Union and Britain was at an all-time high. The Soviets lost +20 million people during the war as the Soviet Army struggled against Hitler’s Operation Barbarossa “in the largest German military operation of World War II.”

But Soviet communications with Britain were of uniformly high quality and information content, and weren’t intercepted by the Nazis as had been feared by British commanders.

The ‘Lend-Lease’ programme, created by the United States and Great Britain to assist their ally, exported aircraft, navy ships, howitzers, and ammunition to the Soviet Union in an attempt to stop Hitler’s army from taking the entire country along with its unimaginable resources.

The cooperation between the three countries during WWII was unparalleled and it worked to benefit all three nations. Millions of lives were saved (especially in Britain) due to this unprecedented arrangement.

Opportunities as Big as the Sky, Where Economic and Strategic Links Meet

It makes sense that northern nations should work together to advance security in their hemisphere, particularly among those nations that own or claim part of the Arctic Ocean and its rich resources.

It would be interesting to locate some Scottish islands where the wind blows constantly (that would be all of them) and install a couple hundred wind turbines along with housing for +3000 presently unemployed blue-collar workers, so they might smelt aluminum ore for export.

But not only aluminum, refining crude oil or making steel uses obscene amounts of electricity too. With cheap wind power located right on-site — one of the biggest production costs for smelters and refiners (energy) is lowered by half — which translates into a pricing advantage for exporters.

Working together, hundreds of billions of pounds could be unlocked to invest in Russian oil and gas, and other resources, inside Russia proper or in the Arctic Ocean.

Hundreds of billions more could build new factories in Russia, taking advantage of the lower energy, labour and regulatory costs there, which could allow Russia to duplicate the astonishing manufacturing leap made by Japan in the 1970-2000 timeframe.

If British banks are financing these operations, and British companies are part-owners with their Russian counterparts, there will be plenty of incentive on all sides to make it work. The very definition of Win-Win.

Over the next 30 years Russia could match the incredible economic leap made by Japan while Britain’s banks get to earn profit on financing that transition, and both British and Russian workers enjoy a fast-paced and profitable economy.

Isn’t that a better future for British and Russian kids than sliding backwards toward a new Cold War?

By Letter to Britain in British Trade Policy, Russia, The Commonwealth of Nations, UK on August 12, 2016.
← A New Foreign Policy for Britain Trading ‘Globalization’ for ‘Interdependence’ →